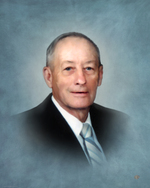 William R. “Bill” Ronan, 87, of Carlisle, died Sunday, February 3, 2013 in the Carlisle Regional Medical Center with his wife and sons by his side.

Early in his life he had been employed by the former A&P Grocery Store in Carlisle and helped his grandfather Nickel deliver firewood to Carlisle families. After  graduating from Carlisle High School in 1943, Bill volunteered for the US Army Air Corps serving during W.W.II.

After his Army service, he was employed by the Naval Supply Depot (now the Inventory Control Point) Mechanicsburg.  He was also employed part time at the former Arnold’s Grocery store in Mt. Holly Springs.  After retirement from the Naval Supply Depot, he was employed as a school bus driver for B and S Transportation in the Mechanicsburg School District and by Rohrer Bus in the South Middleton School District.  After retiring from school bus duties, he assisted his son in operating the Ronan Funeral Home in Carlisle.

Bill was a member of St. John Lutheran Church, Boiling Springs where he had served several terms on the Church Council and various church committees and had served as a leader for the church youth group for a number of years.

A former Scoutmaster of Boy Scout Troop 171, Boiling Springs, he was Scoutmaster when both of his sons attained their Eagle rank.  A member and oldest living Past Master of Cumberland Star Lodge #197 F&AM, Carlisle, he also held membership in the Scottish Rite, Valley of Harrisburg and Zembo Temple A.A.O.N.M.S., Harrisburg.  He had also been involved in the Y Indian Guides.  Bill was a member of the Boiling Springs Lions Club, where he received the Melvin Jones Award in 2005 for his service to Lionism.

Bill enjoyed the outdoors, especially vacationing with his family and spending time at the family cabin in Huntingdon County.  He loved spending time with his grandchildren and watching them grow.

He was preceded in death by five brothers:  Nelson, Raymond, David, Jacob and Franklin.

Memorial contributions may be made to Shriners Hospital for Children, International Headquarters, 2900 Rocky Point Drive, Tampa, FL 33607 or www.shrinershq.org.

Condolences may be expressed at www.ronanfh.com.

To order memorial trees or send flowers to the family in memory of William Ronan, please visit our flower store.