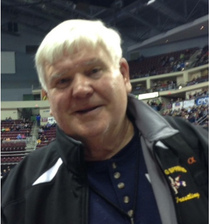 Born April 20, 1936 in Coaldale, Pa, he was a son of the late George and Margaret (Mulligan) Zaengle and was raised by his maternal grandmother Katherine Mulligan.

He was a 1954 graduate of Nesquehoning High School and then entered the U S Army, serving with the Airborne troops during the Korean War.  Upon discharge from the Army, he entered the Pennsylvania State Police Academy and after graduation in 1959 was stationed with Troop H.

Coach had a personality that was bigger than life.  He was an avid outdoorsman and sportsman.  He rarely missed a Boiling Springs High School football game or wrestling match.  Tom was also very active with the BSHS Alumni Association, having helped construct the weight room and concession stands.

He was a member of St. Patrick Catholic Church, Carlisle.

Surviving are his wife:  Darlene (Filipponi) Zaengle; a stepdaughter:  Tracy Marshall of Carlisle; a stepson:  Troy (Liz) Marshall of Blooming Glen; a brother:  John L. (Marjorie) Zaengle of Carlisle; grandchildren:  Chase and Addy Marshall and Aubree and Kai Delp; and many nieces and nephews.

To order memorial trees or send flowers to the family in memory of Thomas Zaengle, please visit our flower store.