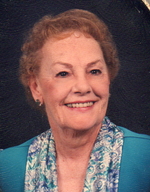 Rita May Snyder, 88, of York and formerly of Boiling Springs, and a longtime resident of Hicksville, NY, died peacefully at home on Friday, June 1, 2012 surrounded by her family.

Born April 13, 1924 in Coal City Twp., Northumberland County, Pa, she was a daughter of the late Arthur R. and Hedwig “Hattie” (Potts) Holman and her step mother:  Alma (Adams) Holman, who raised her. She was the widow of Earl Leroy Snyder who died in January 2002.

Rita was a graduate of Sunbury High School and retired from the Nassau County, NY Health Department as a supervisor, after 20 years of service.

She was a member of St. John Lutheran Church, Boiling Springs.

Her family was her greatest joy and her hobbies included gardening, quilting, needlework and reading.

She was preceded in death by two sisters:  Alma Dabulis and Doris Aikens and a brother:  Arthur Holman.

Funeral services will be held at 11:00 A. M., Wednesday, June 6, 2012 from St. John Evangelical Lutheran Church, 111 Walnut St., Boiling Springs, with the Rev. Carolyn S. DeStephano officiating.  Burial will follow in Cumberland Valley Memorial Gardens.  Viewing will be at the Ronan Funeral Home, 255 York Road, Carlisle on Tuesday from 7-9 P.M. and also at the church on Wednesday from 10-11 A. M.

On-line condolences may be expressed at www.ronanfh.com.

To order memorial trees or send flowers to the family in memory of Rita Snyder, please visit our flower store.