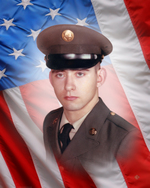 Born July 17, 1949 in Carlisle, he was a son of Mary Jane (Holloway) Hench of Carlisle and the late Melvin J. Hench, Sr.

Mr. Hench was retired from the Carlisle Barracks Commissary where he had been employed as a butcher.

A graduate of Big Spring High School, he was a U. S. Army Veteran of the Vietnam War.

Melvin was a member of the Fraternal Order of Eagles, Aerie #1299 and its bowling league, American Legion Post 101 and VFW Post 477,  and the Carlisle NASCAR Club, all of Carlisle.

Surviving in addition to his mother are his companion:  Linda Hall; two sons:  Melvin L. Hench of Shippensburg and Thomas of Mt. Holly Springs; a daughter:  Jessie Hench of Newville; five brothers:  Lee and Jackie, both of Carlisle; Cleive of Shermans Dale; Jay of Pennsylvania and Dennis of Indiana and 10 grandchildren.

Memorial services will be held at 11:00 A. M. Friday, February 1, 2013 at the Big Spring Church of God, 10 Mt. Rock Road, Newville, with the Rev. Jesse Duncan, officiating.  Visitation will be at the church on Friday from 10:00 A. M. until time of service.  Burial will be private at the convenience of the family.

Condolences may be expressed at www.ronanfh.com.

To order memorial trees or send flowers to the family in memory of Melvin Hench, Jr., please visit our flower store.