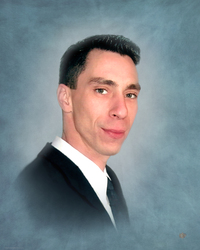 Matthew Benkovic, 40, of Gardners, died unexpectedly on May 4, 2013 near Thomasville, Pa.

Surviving are his beloved wife Melissa Masland Benkovic; two sisters:  Lori Hetrick and Diana Daugherty, both of Harrisburg; two brothers:  Stanley of Friendsville, TN and Mark and wife Barb of Harrisburg; His mother Carol (Kuntz) Benkovic of Lancaster as well as two nieces and one nephew: Nicole Brixey of La Jolla, CA, Virginia Masland and Jud Masland; brother in law David S. Masland III and wife Ann; mother in law: Victoria Otto; father in law David S. Masland Jr. and wife Mary, all of Carlisle. He is also survived by many aunts, uncles and cousins, all of whom loved him very much.

He was preceded in death by his father Stanley A Benkovic and his half brother and sister Michael and Sharon Feaser.

He was a 1991 graduate of Central Dauphin East High School.  He loved his dogs:  Cassie and Sara, playing the drums, the NY Yankees and his favorite band Rush.

He was a Route Salesman for Utz Foods, Hanover.

Memorial services will be held at the Ronan Funeral Home, 255 York Road, Carlisle on Wednesday, May 15, 2013 at 11:00 A. M. with the Pastor David Herr officiating.  Visitation will be at the funeral home on Wednesday from 9:00 A. M. until time of services.  Final services are private.

To order memorial trees or send flowers to the family in memory of Matthew Benkovic, please visit our flower store.