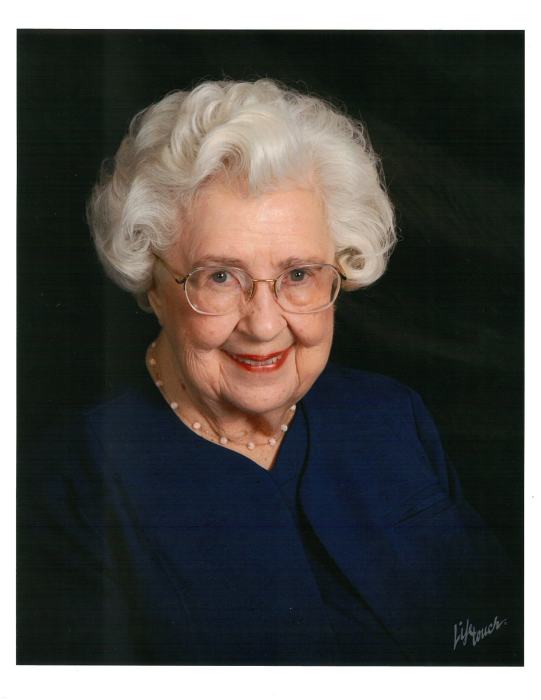 Josephine Lenola Bailey Freund died peacefully in her Carlisle home on February 8, 2020, at age 90. A lifelong musician, she was a professional organist for almost 70 years, and taught hundreds of students to play the piano and organ. She played organ recitals and directed choirs all over the United States, and in Swaziland and Papua New Guinea. She was proud to have played for the Queen Mother and for President Truman.

She was born April 8, 1929, at Methodist Hospital, in Indianapolis, Indiana. She grew up during the Great Depression when her divorced mother supported her by taking in borders and working at a factory. Jo began piano lessons at age 6 and discovered music was her passion. She started studying the organ at age 13. Among her first professional jobs were playing the organ to accompany silent movies and substituting as an accompanist and organist in local churches.

Following graduation from Thomas Carr Howe High School in 1946, Jo attended Wittenberg College, Springfield Ohio. Two years later, she transferred to the Peabody Conservatory of the Johns Hopkins University in Baltimore, Maryland. There she earned a Teaching Certificate in Pipe Organ and bachelor’s and master’s degrees. In 1952, she was the first female graduate of Peabody to earn a Master’s Degree in Organ Performance.

During the 1950s she played at various churches in Maryland, Virginia, and the District of Columbia, including serving as the Music Director for First Baptist in Washington DC, which President Truman attended; and St Anne’s Episcopal Church in Annapolis where she was honored to play for a Royal Visit by Elizabeth, Queen Mother.

From 1956-1961, she was an Associate Professor of Music at Longwood College, in Farmville, Virginia. Josephine was also the organist of First Presbyterian Church. Additionally, she taught music in local Virginia public high schools, which were undergoing a turbulent desegregation battle. She was a firm believer that all children deserved equal educations.

In 1963, she became the first full-time Director of Music at Trinity Lutheran in Camp Hill. She later returned to Indianapolis to teach in public schools and was the organist and Assistant Choir Director at First Presbyterian.

In the early 1970s, she moved to East Lansing, Michigan, to work on her doctorate in Music Theory at Michigan State University. She also was an Associate Professor of Music and the organist and choir director of the Martin Luther Chapel. It was there that she met her future husband Roland who was an Australian agricultural missionary working on his master's degree. They married in July 1971, and moved immediately to the Highlands of Papua New Guinea, where their son Ernie was born in August 1973.

In 1976, the family moved to Carlisle, where Josephine taught piano and was the organist at Grace United Methodist Church. The family spent 1982-1984 working on a U.S. AID and Penn State University project in Swaziland Africa. There she taught music in several schools and directed the largest choir in the country for a performance of Brahms Requiem.

Upon returning to Carlisle, she served as organist and choir director at St. John’s Episcopal Church and the Gettysburg College Chapel. She was an adjunct professor of Organ for Dickinson College and an active member and officer of the Harrisburg Chapter of the American Guild of Organists. Josephine played her last organ recital in 2010, but continued to teach piano and organ, substitute and support church services, weddings, and funerals for a few more years more. She was a lifetime member of the national honors fraternity for women in music, Sigma Alpha Iota.

Throughout her life, Jo loved to travel. She visited all 50 states and numerous countries throughout Europe, Africa, Asia, and Oceania.

Josephine is preceded in death by her father, Harold John Bailey; and her mother, Lenola Magdelaine (Andrews) Bailey. She is survived by her husband, Roland Paul Freund of Carlisle; her nephew, Matthew Freund of South Australia; and her son, Colonel Ernie Freund, daughter-in-law Megan Sayler Freund, and granddaughters, Amelia Rose and Adelaide Pearl, all from Burke, Virginia.

A time of remembrance and light refreshments will be held at the late residence, 382 Petersburg Road, Carlisle on Saturday from 3 until 6 P. M.

To order memorial trees or send flowers to the family in memory of Josephine Freund, please visit our flower store.