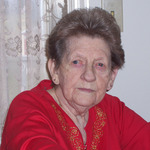 She was born on March 27, 1930 in Carlisle and was the youngest daughter of late Carl E. and Jennie Mae (Bigler) Bender.

She was retired from the Kinney Shoe Factory, Carlisle and also worked at the former Embers Restaurant.  Her life was dedicated to her children and grandchildren.  She enjoyed working in her flower garden, watching birds, and Sunday drives, especially through the mountains.  She was an excellent cook and often made special dinners for her family.

She was preceded in death by her husband US Army retired Edward E. Minnick, Sr., as well as her sister:  Geraldine Schneider and two brothers:  Stewart (Nook) Bender and Marlin (Ben) Bender, Sr.

She will be sadly missed by her children:  Edward E. Minnick, Jr. and wife Barbara (Yost) of Carlisle ; daughters:  Bernice Miller Dorn, Carlisle as well as Robin Ann Drennan and her husband Richard of Albuquerque NM; Darlene L. Blosser and husband Kenneth of Plainfield and Cindy L. Minnick, with whom she resided; a sister: Romaine DiBucci of Pittsburgh and a brother: John Bender of Newville.

She is already sadly missed by her faithful companion Harley, her Shitzu.

Funeral services will be held at 12 Noon on Friday, Feb. 11, 2011 from the Ronan Funeral Home, 255 York Road, Carlisle, with the Rev. Robert Knight officiating.  Burial will be in Cumberland Valley Memorial Gardens.  Viewing will be at the funeral home on  Friday from 11 a.m. until time of service

To order memorial trees or send flowers to the family in memory of Janet Minnick, please visit our flower store.