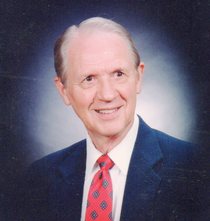 James K. Gotwald, 91, (Jim), beloved husband and caregiver, father, grandfather and friend, passed away on July 28, 2017 in the Harrisburg Hospital.  He died peacefully surrounded by all of his loving family and gracious staff.

Jim was born October 17, 1925 in York, Pennsylvania to Louise and Andrew Gotwald.  During his years in York, he was active in the York Symphony and the York Swing Band.

After graduating from York, he joined the United States Navy and served during World War II in the Pacific.  Upon his honorable discharge he attended Grove City College where he obtained a teaching degree in Music and English.  He taught music in Johnstown, Pennsylvania, in the high school and became the Choir Director at the Reformed Church in Johnstown.  It was there he met his wife, Helen, the organist, and married her.

In 1956, Jim and Helen move to Carlisle, Pennsylvania, where he accepted a teaching position in the Carlisle Area School District.  He taught English in the old Lamberton Junior High School.

Because of Jim’s caring nature, it directed him next to Purdue University.  He obtained a Master’s Degree in Counseling which then allowed him to serve as a Counselor and Vice Principal at the Lumberton building upon his return to the district.  He then moved to the David L. Swartz Building as a counselor.  He continued to serve the school district for 36 years where in 1986 he was awarded the Carlisle Finest in Education Award.

Jim was in love with the Carlisle community.  He served as the choir director in the First Presbyterian Church, First United Methodist Church and was the first Choir Director for the newly formed Carlisle Barber Shop Chorus.  He was a member of the Mt. Holly Lion’s Club, the Carlisle Kiwanis Club and an active member and usher of Allison United Methodist Church.  He also served as a Trustee for the Helen Stevens Mental Health Center.

He lived a simple life of loving his kids, his grandchildren, his coffee buddies, his yard and his flowers.

At Jim’s request, his burial will be private with his family.  There will be a memorial service to celebrate his life on Saturday, August 26, 2017.  It will be held at 11:00 A. M. at the Carlisle United Methodist Church, 45 S. West Street, Carlisle.

The family thanks all of you for your expressions of love and sympathy.  Memories and condolences may be shared at www.ronanfh.com

To order memorial trees or send flowers to the family in memory of James Gotwald, please visit our flower store.