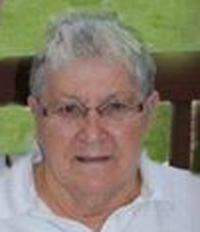 Jacqueline M. Spahr, 79, of Carlisle, was called home to be with the Lord on Monday, September 30, 2013 at home with her family by her side.

Born February 21, 1934 in Carlisle,   she was the youngest of 16 children  of the late Frank and Bertha (Richwine) Adams.

She was a graduate of Carlisle High School.

Mrs. Spahr was retired from the former Carlisle Tire and Rubber.  After retirement she was employed as a cook at Letort Elementary School.

She was a life long member of the former Grace United Methodist Church serving on various boards,  the youth fellowship and as an usher.

She was a loving and devoted wife, mother, grandmother, and great grandmother who always placed everyone’s needs above her own.

Funeral services will be held at 11:00 A. M.  Thursday, October 3, 2013 from the Ronan Funeral Home, 255 York Road, Carlisle, with the Rev. James Vanzandt officiating.  Viewing will be at the funeral home on Thursday from 10:00 A. M. until time of service. Burial will be private at the convenience of the family. in Cumberland Valley Memorial Gardens.

On-line expressions of sympathy may be expressed at www.ronanfh.com.

To order memorial trees or send flowers to the family in memory of Jacqueline Spahr, please visit our flower store.