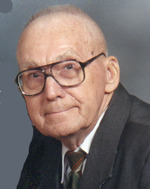 Mr. Mitten was a US Army veteran.  Prior to entering the armed services, he was a farmer.  Later he was employed by the former Pennsylvania Railroad and the Penn Central Railroad.  He was also employed at the former Olmstead Air Force Base, Middletown and the Naval Inventory Control Point, Mechanicsburg.  He then retired from the Maintenance Department of the former Carlisle Hospital with 14 years of service.  During the last several years Mr. Mitten greatly enjoyed singing at various area churches.

He was preceded in death by three sisters:  Dorothy, Carrie and Doris and a brother:  John.

Funeral services will be held at 10:00 a.m. Saturday, July 9, 2011 from the Ronan Funeral Home, 255 York Road, Carlisle, with the Rev. Paul Dunbar  officiating.  Burial will follow in Cumberland Valley Memorial Gardens.  Viewing will be at the funeral home on Friday from  7-9 p.m.

In lieu of flowers, memorial contributions may be made to Bethany Evangelical Church, 558 Petersburg Road, Carlisle, Pa 17015.

To order memorial trees or send flowers to the family in memory of Harry Mitten, please visit our flower store.