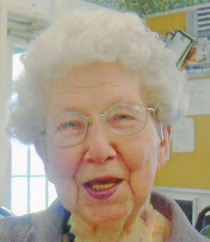 H. Romaine “Skip” Sheaffer, 91, of Dillsburg and formerly of Huntsdale, died Sunday, November 30, 2014 at Elmcroft of Dillsburg where she had bee a resident for the last three and one-half years.

Born November 14, 1923 in Monroe Twp., Cumberland County, she was a daughter of the late John E. and Ruth A. (Woods) Leib.  She was the widow of Seldon Parker Hoover and Glen Richard Sheaffer.

Skip was a member of the Huntsdale Church of the Brethren and a former member of Mt. Zion Lutheran Church, Boiling Springs.

She had been employed by the former Kinney Shoe Corp., Carlisle, the former Valley Pride Bakery and the former Liberty Lunch.  She was also a volunteer cook at the Penn Township Volunteer Fire Co., Huntsdale, for many years.  She was a member of the Farm Women Group.

Funeral services will be held at 11:00 A. M. Monday, December 8, 2014 from the Huntsdale Church of the Brethren, 180 Church Road, Carlisle, with the Revs. Robert Baldwin and Keith Searfoss officiating.  Burial will follow in the adjoining church cemetery.  Viewing will be at the church on Monday from 9:00 A. M. until time of service.

To order memorial trees or send flowers to the family in memory of H. Sheaffer, please visit our flower store.