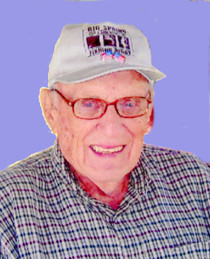 Born April 28, 1919 in West Pennsboro Twp., he was a son of the late J. Frank and Emma Louella (Morrow) Throne.  He was preceded in death by his wife:  Esther M. (Young) Throne.

Additionally, he was preceded in death by a son:  Richard Glenn Throne; two brothers:  Harold Throne and J. Clair Throne and a sister:  Mary Bowers.

He was a member of the Plainfield First Church of God.

He had been employed by Frank Black Mechanical Services as a plumber and was a 55 year member of Plumbers and Pipe Fitters Local 520.

Funeral services will be held at 2:00 P. M. Tuesday, December 15, 2015 from the Ronan Funeral Home, 255 York Road, Carlisle with the Rev. Kevin Dunlop officiating.  Burial will follow in Westminster Cemetery, Carlisle.  Viewing will be at the funeral home on Tuesday from 1:00 P. M. until time of service.

To order memorial trees or send flowers to the family in memory of Glenn Throne, please visit our flower store.