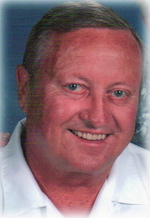 Emmettt T. Clancy, 71, of Newville, died Saturday, July 21, 2012 in Holy Spirit Hospital, a month after being diagnosed with cancer.

Emmett was born in Madison, South Dakota on August 16,1940 to Margaret (Schoeberl) and Thomas Clancy.  He married Dianne Bargmann Clancy on February 8, 1964.

Emmett is survived by his wife of 48 years, Dianne and three children: Sheila of Arlington,Texas; Chad of Boiling Springs, his wife LaDawnna and their six children, Paige, Elaina, Grace, Joseph, Kathryn and Christopher; and Joel of Clear Lake, Iowa and his wife Jennifer and their two sons, Joshua and Ryan.  He is also survived by his sister Joan Bielmaier and brother Jim Clancy, both of Littleton, Colorado.

Mass of Christian Burial will be celebrated at  2:00 P.M. Wednesday, July 25, 2012 at St. Patrick Church, Marsh Drive, Carlisle. Visitation and a reception will follow the mass in the Parish Center.

Burial with military honors will be in Indiantown Gap National Cemetery, Annville on Thursday, July 26, 2012 at 11:00 A.M.  The funeral procession will depart the funeral home promptly at 9:45 A. M. Thursday.

In lieu of flowers the family has requestd that memorials may made to St. Patrick Church, 152 E. Pomfret St., Carlisle, Pa 17013.

To order memorial trees or send flowers to the family in memory of Emmett Clancy, please visit our flower store.