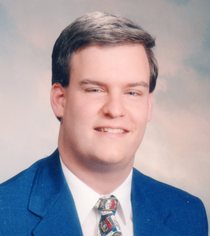 Born December 8, 1975 in Carlisle he was the son of Donald and Joanne (Paukner) Spahr of Carlisle.

David was a graduate of Great Hope Baptist School and Harrisburg Area Community College, where he received a degree in English and Communications.

He was a member of St. Matthias Lutheran Church, Carlisle Springs and Good Shepherd Catholic Church, Camp Hill. David and his wife Amanda were very active in the Good Shepherd Church community.

He was employed by the Pennsylvania State Police in Harrisburg.  He enjoyed politics, family activities and animals, especially his three cats.

In addition to his parents, he is survived by his wife:  Amanda (Zechman) Spahr; a brother:  Michael E. Spahr and many cousins, aunts and uncles, including Treva Myers, to whom he was especially close.

Mass of Christian Burial will be celebrated at 11:00 A.M. on Wednesday, March 9, 2016 at Good Shepherd Catholic Church, 3435 Trindle Road, Camp Hill, with the Very Rev. Philip Burger, his pastor, as celebrant and Rev. Sarah Heintzelman of St. Matthias Lutheran Church, assisting.  Viewing will be at the church on Wednesday, from 9 - 11 A. M.  Burial will be private in LeTort Cemetery, Carlisle.

Memorial contributions may be made to New Cumberland River Rescue, 1127 Market Street,

To order memorial trees or send flowers to the family in memory of David Spahr, please visit our flower store.