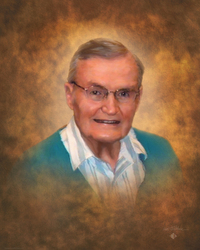 Born August 15, 1923 in North Middleton Twp., Cumberland County, he was a son of the late Abram N. and Mary (Steckley) Lehman.  He was the loving husband of Isabel (Gillaugh) Lehman who survives.  They celebrated their 67th Wedding Anniversary on November22,  2012.

He attended the Carlisle Schools and was a 1941 graduate of Messiah Academy.

Mr. Lehman  was a  farmer and had also been employed by Clouse Trucking and as a school bus driver with the Carlisle Area School District.

Carl had also been a former member of the Carlisle Area School District School Board, was a board member of various farming organizations and a member of the Cumberland County Prison Ministry, where he received the Volunteer of the Year Award.

He was a lifelong member of the Carlisle Brethren In Christ Church where he served as a Sunday School teacher and Deacon. He was also involved with the Boy’s Brigade and the Usher’s Association.

He was preceded in death by a son:  Theodore G. Lehman, a brother:  L. Bruce Lehman and two sisters:  Ruth Lehman and  Pearl Stull.

To order memorial trees or send flowers to the family in memory of Carl Lehman, please visit our flower store.