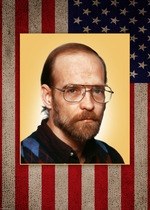 Born Dec. 1, 1960 in Carlisle he was the son of Richard and Betty (Putt) Keck of Carlisle.

Bryan was a graduate of Boiling Springs High School and was a retired Mess Management Specialist in the U S Navy Submarine Service.

He was a member of the American Legion Post #101 and VFW Post #477, Carlisle and the Carlisle Gun Club.  Additionally, he loved target shooting and leatherwork and was a Steelers and NASCAR fan, especially Dale Earnhardt.

He was preceded in death by a brother: Gregory W. Keck

Surviving, in addition to his parents are two sisters:  Cynthia Cornell of Duncannon and Stephanie Peters of Carlisle; his maternal grandmother:  Ethel Putt of Mechanicsburg and numerous aunts, uncles, nieces and nephews.

Funeral services will be held at the Ronan Funeral Home, 255 York Road, Carlisle on  Thursday, October 28, 2010 with  Chaplain  (Col) David Reese  officiating.  Viewing will be at the funeral home on  Thursday  from 1-2 p.m..  Burial will be private in Indiantown Gap National Cemetery.

In lieu of flowers, memorial contributions may be made to Hospice of Central Pennsylvania, 1320 Linglestown Road, Harrisburg, Pa 17110
To order memorial trees or send flowers to the family in memory of Bryan Keck, please visit our flower store.