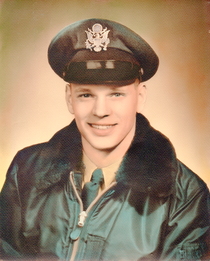 Col. Hetrick retired from the United States Air Force after 27 years of service.  He served in Vietnam and was a navigator for flight missions all over the world.

A graduate of Huntingdon Area High School, he received his Bachelor of Science degree from Juniata College, Huntingdon and his Master’s degree from the Air Force Institute of Technology.

He loved God, his family, friends and his country.  Brad enjoyed life, telling and hearing jokes, hunting, fishing, boating, hiking and spending time at his log cabin at Lake Raystown.  He was a fierce fan of the Pittsburgh Steelers, Pirates Baseball and Penn State Football.

He was a faithful member of St. John Evangelical Lutheran Church, Boiling Springs, where he served many years as the church treasurer.

He was preceded in death by his first wife:  Lois Jean (Edwards) Hetrick; a sister:  Pearl Smith and a stepson:  Lee Charles Mohme.

Memorial services will be held at 11:00 A. M. Tuesday, February 11, 2014 from St. John Evangelical Lutheran Church, 111 Walnut St., Boiling Springs, with the Rev. Carolyn S. DeStephano, his pastor, officiating.  Burial with full military honors will be in Indiantown Gap National Cemetery.  Visitation will be at the church on Tuesday from 10:00 A. M. until time of service.

In lieu of flowers, memorial contributions may be made to Boiling Springs VFW Post 8851, 26A Hamilton Road, Boiling Springs, PA 17007 or to the Wounded Warrior Project, P.O. Box 758517

To order memorial trees or send flowers to the family in memory of Bradley Hetrick, please visit our flower store.