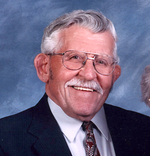 Born in Dickinson Township, Cumberland County on Sept. 14, 1919, he was the son of the late S. Harvey and Mary Jane (Mellinger) Martin and the widower of Erva Mae (Myers) Martin, who died July 5, 2009.

Art was a 1938 graduate of Boiling Springs High School and served in the U S Army during World War II and Korea and received two Purple Hearts for wounds received in combat.

After returning home from the service, he settled in the home in which he was raised.  He was employed at that time by the former Rufe Chevrolet, Carlisle, where he was in charge of the Glass Shop.  After PPG opened in Carlisle in 1972, he was employed there as a security guard and later in the factory, until his retirement.  He was then employed by the Ronan Funeral Home for several years.

He was a member of Barnitz United Methodist Church, Carlisle.

He was preceded in death by a son:  S. Harvey Martin and a sister:  Martha Tritt.

Funeral services will be held at 11:00 a.m. on Tuesday, Nov. 1, 2011 from the Ronan Funeral Home, 255 York Road, Carlisle, with  Marlin Herr officiating.  Burial, with military honors by the Cumberland County Honor Guard, will be in Mt. Zion Cemetery, Boiling Springs.

To order memorial trees or send flowers to the family in memory of Arthur Martin, please visit our flower store.